The day has finally come. Julie & Julia opened and the rest of the world is now free to make their own conclusions about the movie. I'll admit part of opinion may be a little askew because I did talk with Julie Powell for an interview in Relish magazine. The idea that Julia Child thought she was disrespectful in her Julie/Julia Project is odd to me. As Powell says, "I was figuring where I was in my life and following someone who had figured it out for themselves". Sounds like a genuine compliment to me. But then again blogging was relatively new and and taking on the personal challenge Powell did was also unique in 2002.  Why are food bloggers and prominent food writers/chefs so ready to dislike Powell? Jennie Yabroff wrote a great article in Newsweek asking and answering all these questions.

Perhaps the problem is the very form of communication we've all come to rely on, sending thoughts into "space" with the click of a button. Personalities have been taken out of the equation, allowing people to form opinions without having met someone in real-life. It's the ultimate judging a book by its cover.

So what did I think of the movie? That's the real reason I'm clicking away at the keyboard at 1:30am. I liked it—a whole lot. I'll admit I went in skeptical. I had read so much about how Julia's story was great and Julie's was, well, lacking seasoning so to speak. One syndicated critic actually wrote "loved the first course, hated the second". I'm curious what was there to hate about the story of a woman who found herself at a crossroads in her life. Haven't we all been there? Wasn't that Julia's story too? These were two women looking for purpose, fulfillment, and meaning in their lives. Julia Child had the luxury of doing it as a full-time endeavor. Julie Powell had to do it on the night-shift. It's the eternal juggle women have had to face since feminism came into fashion. I've been there. I feel like I'm there most days as I try to balance my work schedule, motherhood and marriage.

Julie Powell had the mixture of a good idea and being at the right place, at the right time. Kind of like Julia Child. Shed your preconceived notions and watch the movie with a fresh perspective. I'm betting you'll walk away feeling encouraged that you've got it in you to do whatever you set your mind too, and that's the real message in this movie. 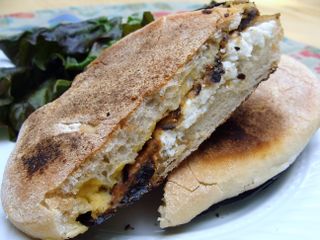 Speaking of putting your mind to a project. I've had panini cravings, probably from reading Panini Happy, but don't own a press. Really. No worries. All you need is a cast-iron skillet (even a non-stick skillet will work) and a heavy pot or casserole dish to act a "press" and weigh the sandwich down.

A good smear of mango hummus

Heat a cast-iron skillet over medium-high heat. Meanwhile, assemble the panini. Place the eggplant slices on the bottom half of the bread. Evenly sprinkle cheese on top. Spread hummus on top half of bread and place on bottom half. Place sandwich in center of heated skillet and weigh down with  a heavy-bottomed pot of casserole dish (like the one in the picture below). Cook until bottom is golden. Remove weight, flip over, replace weight and continue cooking until other side is golden. 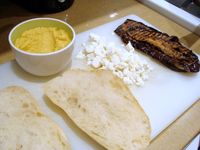 Being Julie, Not "Julie"

Thoughts on the Newsweek article from The Accidental Hedonist

My chances of seeing this as a first-run movie are small, but I look forward to watching it eventually. Thanks for your $.02.

I think I'm going to see Julie & Julia today, actually. I've been looking forward to it! I have been reading the book, too. I don't understand the Julie Powell hatred, either. While I've never met her, I have to respect her courage for taking on such a big project, especially when blogging wasn't as popular as it has become today.

I think it was a great idea and can't wait to see the movie. I've considered doing the same kind of thing, but just working through my collection of cookbooks, I have 50 or so. The lack of time is the challenge. Kids/Work/husband all want a piece of the pie and my own slice gets smaller and smaller.

Thanks for your thoughts on the movie. I definitely want to see it.

I have not seen the movie (haven't been to a movie in three and a half yrs now) hmm need a babysitter. Anyhow, I do know of Julia Childs' story, as incredible it is....what more feasts my famined eyes is your Eggplant & Manouri Panini....OMG! I will be knocking on your door in a matter of (calculating flight and taxi time) .... 9 hrs and 16 minutes.
Cheers!
~daddy b

I'm so glad you liked it. I've loved the commercials and really want to see it, and it seems like I've been disappointed by so many movies lately!

Just saw this today too. I can relate to the self imposed deadlines, cooking and gaining weight and being pleased out the outcome. And here I am back in the kitchen cooking soup, bread and fava bean crostini!

Daddy B - Three years? Yes, you need to get a sitter asap. Let me know if you give the panini a go.

Gina - I love fava beans. wish you could ship some of those crostini.