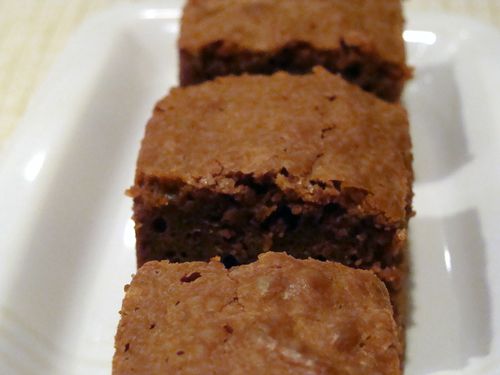 If you were on Twitter last night, you likely read my tweets about testing out brownies using whole wheat flour. Well, thankfully the flour was bad. Not as in naughty—I made the cardinal mistake of not storing it in the fridge. Whole grain flours, once opened, go stale easily if not stored in a very cool place. Truth be told, I'm glad it wasn't usable. I just don't see the point of whole wheat flour in brownies. Added fiber? Neglible. Healthier? Sure, but the chocolate and butter negate that right away. So why was I going to even use it in the first place? Baker's confession: I had a mere half cup of all-purpose flour in the pantry! I trekked to Trader Joe's at the beginning of the week only to find they were all out of flour. I've been so busy with writing assignments and other recipe testing that didn't call for flour that I haven't yet re-stocked this most necessary item.

Back to the brownies. Faced with just one half cup of flour, I had one last trick up my sleeve. I used cake flour to make up the difference. I wasn't too worried since it's lighter and would likely just make a more delicate brownie, and I wasn't dissappointed. These brownies are like a young wine. A little "decanting" helps them take on a more developed taste. Warm from the oven they were very light in texture with a subtle milk chocolate flavor. Two hours later (yes, I was really eating brownies that late at night), and they became a bit more dense in both body and taste. I guess you can say they matured a bit. And in the morning when I wake up, I expect they'll taste yet even better. And you all have Erin at Smallbites to thank for these tasty treats. She gave me a huge chunk of Lexington-Blommer chocolate that inspired my brownie state of mind in the first place. 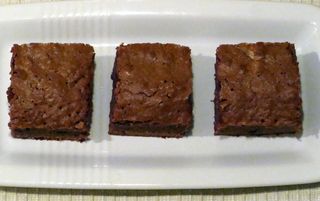 3. Using a rubber spatula, stir in the sugar. Add eggs and vanilla; stir until mixed well. Sprinkle flours over chocolate mixture and fold in using spatula. Pour into prepared baking dish and use spatula to spread batter to edges if necessary. Bake for 35 minutes or until center is set. Let cool in pan for 5 to 10 minutes. Cut into 12 even squares using a very sharp knife.

Great idea to substitute some AP flour with cake flour. Wishing I had one of your brownies right now.

Oh yum, I'm going to try these. I got the whole wheat white flour and honestly sometimes use it not for health, although that helps, but so I don't have to keep so many kinds of flour :) We used ww for almost everything growing up. How on earth can you tell if flour has gone stale?

These look yummy. I've been bringing baked goods to work even after losing my job :) and my former employee just loves milk chocolate so good inspiration.

These brownies look so tasty! I'm with you on not bothering to make brownies with whole wheat flour. I, too, would like to know how you can tell that the flour is stale?