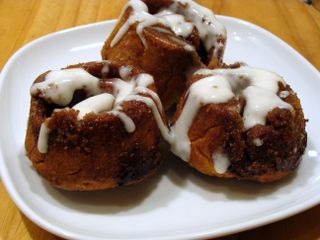 What is it about a bakery that makes my knees weak?  Is it the sugar, the yeast, the sight of all those delectable treats waiting to be eaten?  The first attraction is the smell wafting onto the street every time the front door opens.  These familiar aromas become snapshots our brain takes and catalogs.  It is those few meals or foods that leave such a lasting impression, that take me on a journey trying to replicate the experience.

The journey I found myself on recently was the taste of the cinnamon rolls my best friend and I used to get after high school way back when.  At least once a week, we'd find ourselves in the cellar of Macy's in Herald Square to satisfy our sticky bun sweet tooth.  This was long before the days of the chemical-aftertaste Cinnabon chain.  These cinnamon sticky buns were made by hand, selling quicker than they could be made.  Often times we'd have to wait for a fresh tray to come out of the oven.
During my last pregnancy, my cravings were in over drive and I found myself thinking about those sticky buns constantly.  Cook's Illustrated featured a Quick Cinnamon Bun recipe back in 2002 that has good flavor but there was always something amiss for me.  Perhaps it was the addition of cloves in the filling (it was too adult to channel that adolescent taste I wanted) or the fact that the dough wasn't sweet enough.  It was a good starting point, though, so I decided to play around with the ingredients and proportions.
The cloves were the first to go and I decided to increase the amount of sugar and butter in the filling too.  Rich flavor was the goal, so calorie counts were cast aside.  The dough in the Cook's recipe is based on a quick biscuit method and I much preferred that to the alternative yeast-based dough that would require hours of proofing.  On a culinary hunch, I reduced the amount of buttermilk while increasing the amount of sugar and baking powder, resulting in a sweeter, lighter finished product.  I kept the amount of butter called for in the dough but changed the amounts in which it was distributed (added more to the batter, reserving less to brush on top of the rolls) to create a richer dough.
Last trick was the method for removing the rolls from the pan.  Rather than slide them out, I turned the pan upside down to preserve the gooey, cinnamon-sugar filling that had seeped out while baking.  Whether you serve them right-side up as cinnamon rolls or upside down as sticky buns, they're sure to disappear within minutes.

These are best served warm but can be also be reheated in the microwave the next day if there are any leftovers. Make sure to read the recipe before you begin: the six tablespoons of butter called for in the dough gets added in increments, so be careful not to add it all in step two.
Filling:
¾ cup packed dark brown sugar
½ cup granulated sugar
2 teaspoons cinnamon
½ teaspoon salt
2 tablespoons melted butter
Dough:
2 ½ cups flour, plus more for rolling out dough
3 Tablespoons granulated sugar
1 ½ teaspoons baking powder
½ teaspoon baking soda
½ teaspoon salt
1 cup buttermilk
6 Tablespoons melted butter
Icing:
1 ounce cream cheese, softened (about 2 Tablespoons)
2 tablespoons buttermilk
½ cup confectioner's sugar, sifted
1. Preheat oven to 425ºF.  Spray a 9-inch cake pan with nonstick cooking spray and set aside.  Combine filling ingredients in a small bowl and stir with a fork until blended.  Set aside.

3. Add the flour mixture to the bowl of your Cuisinart Stand Mixer.  Using the dough hook attachment, turn on your mixer to medium-low speed and slowly pour in the buttermilk mixture.  Mix just until the liquid and dry ingredients have combined (dough will appear lumpy).  Turn the mixer speed to high and beat until the dough comes together in a ball (about 30 seconds).

4. On a generously floured surface, knead the dough about 15 seconds until smooth.  Roll out into a 16" x 12" rectangle.  Brush with two tablespoons of melted butter.  Evenly sprinkle the cinnamon-sugar filling over the dough, leaving a ½ inch border plain on the top and bottom.  Press filling into dough with fingertips. 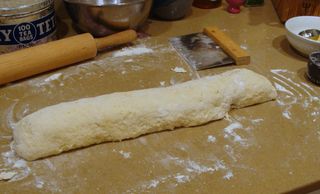 5. Roll dough into a log starting from the longest (16-inch) side nearest you, as pictured above.  Pinch ends and seam closed.  Cut into eight equal pieces*.  Place one piece in center and fill in pan with rest of the pieces.  Press down each roll with your hand to flatten slightly.  Brush tops with remaining tablespoon of melted butter.  Bake for 22 minutes or until golden brown.  Remove from cake pan, being careful to keep rolls together, onto a wire cooling rack or serving dish.  Let cool for five minutes.

6. While rolls are cooling, make the icing.  Whisk cream cheese and buttermilk together in a small bowl until smooth (mixture may have small lumps).  Add sifted confectioner's sugar and meat with a whisk until smooth and there are no more lumps.  Drizzle over cinnamon rolls and serve immediately. 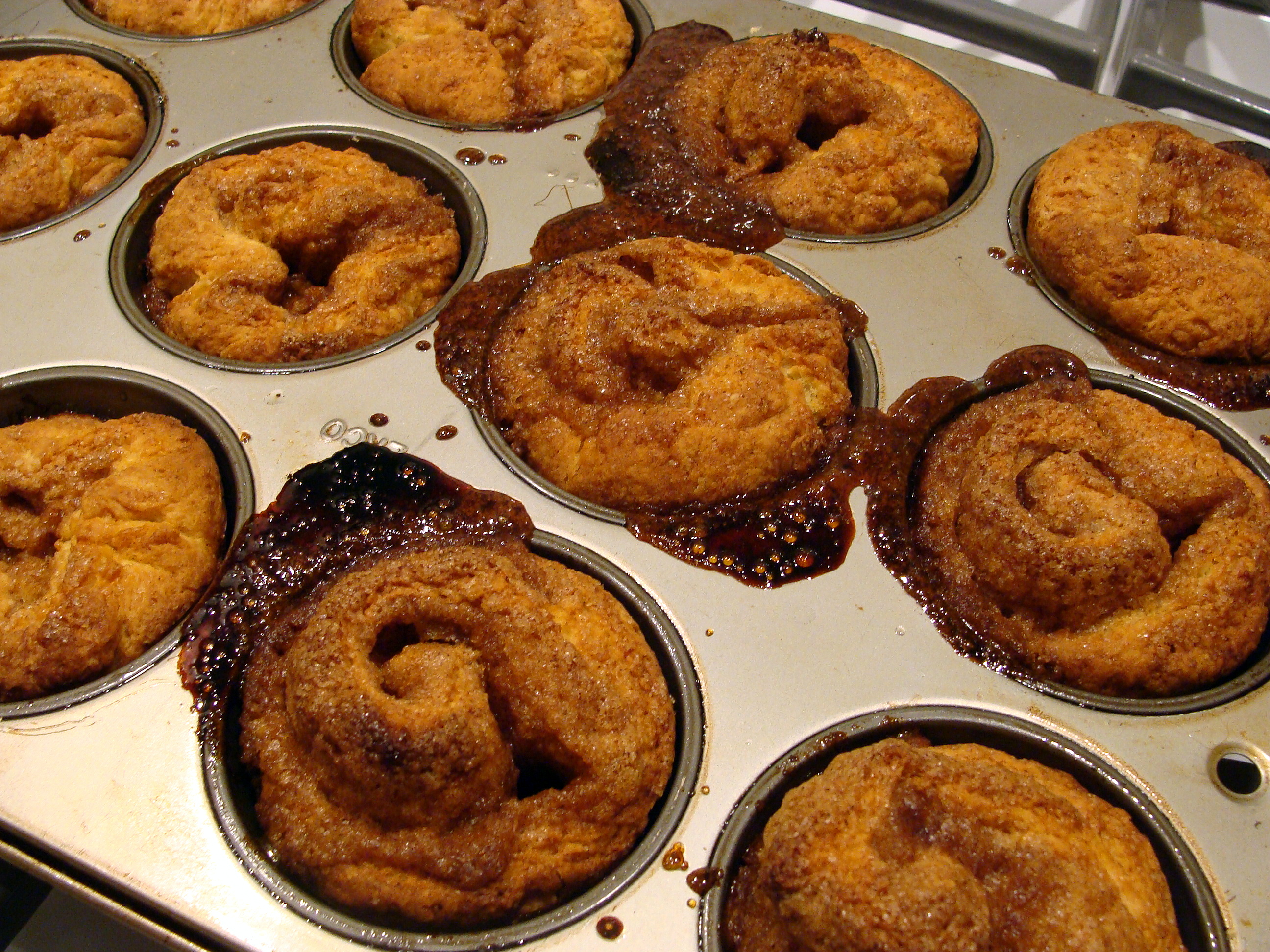 * For slightly smaller rolls, perfect for brunches, cut the formed log into 12 equal pieces and gently press into a 12-cup muffin tin, as pictured above. Reduce cooking time to 17 to 19 minutes, or until golden. Let rest in pan for one minute, then transfer to a serving dish and drizzle with icing.
VARIATIONS
Nutty Sticky Buns
Add one cup of chopped walnuts or pecans to the baking pan before putting in the cut rolls.  Follow directions as listed in original recipe.  When the rolls are done, turn the pan upside down and invert the buns onto a wire cooling rack or serving dish.  The top will be gooey and covered with the melted filling and the nuts.
Cinnamon Raisin Buns
Add one cup of raisins to the filling mixture. Follow the rest of the directions as listed.

Posted at 06:06 AM in breakfast, Entertaining, quick cooking | Permalink

I want to come to your house for breakfast every day. First those pancakes and now this. Fantastic!

These look fantastic! I love that you have pics of all the steps (makes it so much easier to follow!) and the cream cheese frosting... my favorite! Yes, they would disappear in seconds in my place!

Wish I had one of these rolls, instead I am eating cereal for breakfast. They look fantastic!

Ooh - these look wonderful. I adore cinnamon rolls. They always remind me of when I was little and I would sit in the kitchen and watch my mom bake.

Thanks for the sweet words of praise! Wish I could send you all a warm batch.

These look great Jennie. It's been far too long since I made any. Thanks for the inspiration.

These look delicious. I love baking rolls in my muffin pan... Helps to avoid the giant single roll blob that inevitably forms in my cake pan!