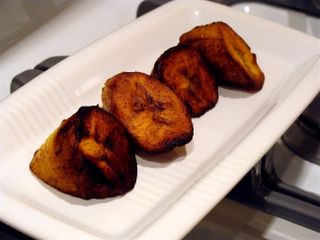 After my last plantains post, there was a flurry of email activity with my best friend (you know the one who taught me to make them in the first place). So, here's some backstory. There are two types of plantains you can buy: unripe and ripe. Let me start by clarifying that when you prepare the unripe, green ones by frying them up and smashing with a tostonera, they are called tostones.

Moving onto the second part of my plantain tutorial, I decided to give the ripened, yellowish-black ones a try based on Jeanise's preparation (said friend). I've never been a fan of them but I now know it's because I don't like them served split lengthwise. I much prefer small chunks, cut up and fried crispy golden in some canola oil. 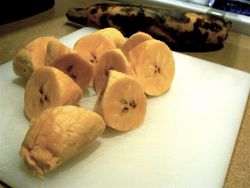 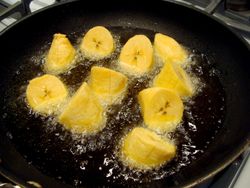 They're a bit crunchy on the outside (especially with really ripe ones), and gooey inside when fresh from the frying pan (caution: they're obviously blazing hot too!). 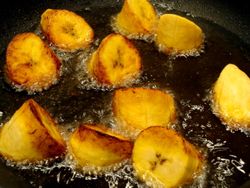 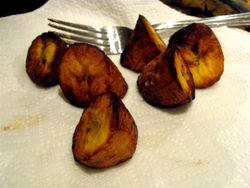 Again, this is really no-recipe required. You can also create desserts from really overripe plaintains but we'll save that for another post. Jeanise even mentioned a Puerto Rican lasagna-like dish made with sweet plantains. I've yet to tackle that one. And feel free to chime in if you've got a favorite recipe too.

Posted at 06:27 AM in quick cooking, sides, Snacks | Permalink

Looks great. Plantains dont get enough love in the US.

Hi Jennie. We have plantains here in our markets because of all the latinos in our community. We do make them to go with our Mexicali cooking class. Such a good idea. Thanks, s

You should try slicing them with a mandoline over hot oil. These are one of my favourite kind of chips!