Making plantains is so easy it doesn't even require a recipe—it's all in the technique. I learned this one from my highschool best friend who's Puerto Rican. Akin to the double-fry method used for french fries, the slices are cooked in hot oil once until just before they become pale golden. I generally use canola oil since it's lighter and doesn't impart any flavor, but recently gave it a go with extra virgin oil and had equally delicious results. 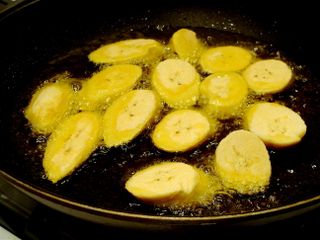 They're then smashed thin using a tostonera (see pic 1). When I first started serving them up years ago, I'd use an empty wine bottle and give them a whack between two sheets of paper towels. Now I use the tostonera I got at the local Met Food for $2.

After you smash the plantains, fry them again for a couple of minutes on each side until they're deep golden and crisp. Drain on a paper towel-lined plate and season with salt. Serve hot. 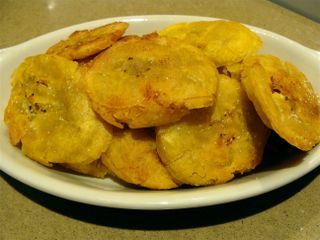 Posted at 09:34 AM in dinner, quick cooking, Snacks | Permalink

Ah! It's the smashing part I never got.

I think they still sell them at Met and maybe even Fairway. Check next time you're there (or you can always come here for dinner!).

Mmm, those look delicious! Isn't it somewhat traditional to serve them with mango chutney (in some culture???)? I have had them like that and it's yummy!

Plantains are traditional in many Latin American and Carribean cultures, so yes chutney is commonly served with them. Hope you enjoy this recipe.